Study Visit in Portugal – MY EARTH

The visit study in Beja – Portugal, took place between the 1st and the 6th of March, 2019.

Beja is a Portuguese town belonging to the Alentejo region and sub-region of the Baixo Alentejo, Capital of the Lower Alentejo with around 23 400 inhabitants in its urban perimeter, being the capital of the District of Beja.

It is home to one of the most extensive municipalities of Portugal, with an área of 1 106.44 km2 and 35 854 inhabitants (2011), subdivided into 12 parishes. It has been witnessing for some decades the aging of the population due to the low birth rate and the abandonment of young people.

On the day of the arrival a bus was arranged which transported all participants from Lisbon airport to Beja, where the visit study was held.

Participants stayed in the Hotel Francis (three stars), in double rooms respecting the genre. Meals were served in several local restaurants based on traditional cuisine and respecting individual food restrictions.

On the first day, a brief welcome session was given and the meeting time was indicated the following day. On the 2nd day, the program was formally presented and cloth bags distributed with the logo and data of the project, contributing to the visibility of the same. Next, the first activity “Learning Adventures in Beja” was started, divided into three multinational teams, the participants were led to discover the city by themselves and to experience the kindness and hospitality of the local inhabitants.

We met again to have lunch and collect feedback from the game, which was quite positive and exceeded expectations.

In the afternoon, we visited the Herdade da Figueirinha. Herdade da Figueirinha, was acquired in 1998 by Comendador Leonel Cameirinha, and today under the management of the grandson Filipe Cameirinha Ramos, joins three generations around the land, agriculture, and the passion for wine and olive oil culture. “The promise of the land has conquered the heart and the will of a grandfather and grandson. Two men, one passion: the culture of wine and olive oil on that piece of land. “The project embraces the ecosystem, in an integrated production philosophy, with optimization of resources and protection of the environment. In the future, sustainable and in full harmony, dedicating itself to the production of olive oil and wine.

Dinner was served in a local restaurant and the night turned into a cultural experience, animated by young Alentejans of the choral group, the disciples who interpreted several traditional fashions recognized as intangible heritage of humanity by UNESCO. 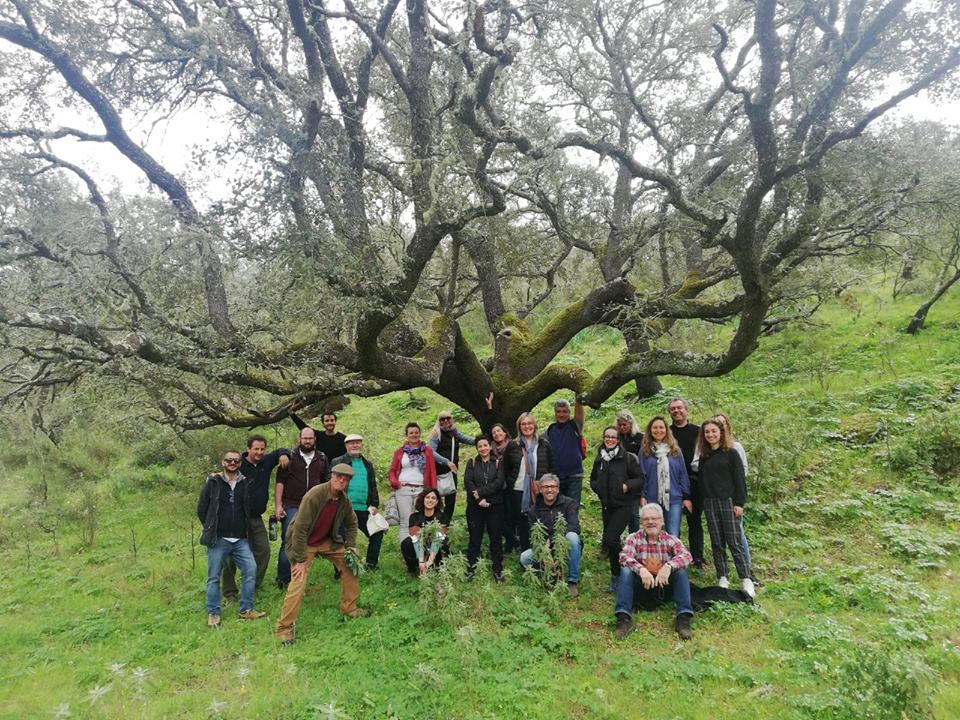 On the 3rd day, the morning began with a visit to a wheat mill, part of the Beja Experiences project. This mill, located on the outskirts of Beja, is owned by a private individual and has been in the family for several generations. Its construction should go back to the year 1872, however, the current hill date back to the 1930s, as well as the furnace and annexes to the dwelling. Due to its patrimonial interest, this Mill was a project of recovery and reactivation, with a view to the dynamization of the space, (re) appreciation of the landscape around the city, and demonstration of a traditional activity closely linked to the economic base of the region, wheat cereal.

It is said that the construction of the Big Mill was born of a contrariety. The first owner was Francisco Frazão Crujo, who decided to build it because he had been denied the sale of Moinho do Meio (one of the two mills in the current adjacent set), he promised that he would make a bigger one. Its construction dates back to 1872. It was later acquired by another owner, known as José Maria Padeiro, who would later sell it, and then sell it to Francisco Gertrudes, the great-grandfather of the current owner. This one will still have witnessed the construction of the Great Mill, when, having left Beringel, the town where he lived, went to “sortes” Beja. On the way to the city, you will have observed the construction works of the Great Mill. What will have happened to him, we will never know, but perhaps soon there Francisco Gertrudes had thought of owning that new mill. In fact, a few years later, he would acquire it and work on it. The miller’s shelter was a low shack against the scaffolding on the north side, where the house of the masonry now stands. The current hill dates back to the ’30s of the last century, as well as the furnace and annexes to the dwelling. The hut that initially served as housing came to be used for shelter for sheep, chickens, and rabbits as far as the current owner saves memory, from his childhood. The mountain has also undergone changes over the years. At first, the whole width of the west side was used as a stable and haystack in a single division. This division came to be still used as a warehouse of masonry utensils. Already in the middle of the ’70s, a wall was built in the “casão” that happened to divide it into the kitchen and house of arrumos. There were two chariots of the beast, one for transporting wheat and flour and the other with a kite to supply water to all activity and consumption of people and animals. In 1954 an auxiliary motor was installed, to move a couple of mills, under a law that allowed this installation. This improvement intensified the activity with the manufacture of flour in a more regular way and guaranteed a more effective and timely delivery. At that time the well was opened which facilitated the use of water. Soon after, a telephone was installed in the house and a “forguneta” was acquired, which replaced the beast and the wagon, contributing to the faster delivery of the customers. We can consider this period from the 1950s to the beginning of the 1970s as the greatest expansion of activity, after which, for various reasons, began its decline.

This story was told in the first person by the owner’s son, whose charm and kindness charmed the participants. 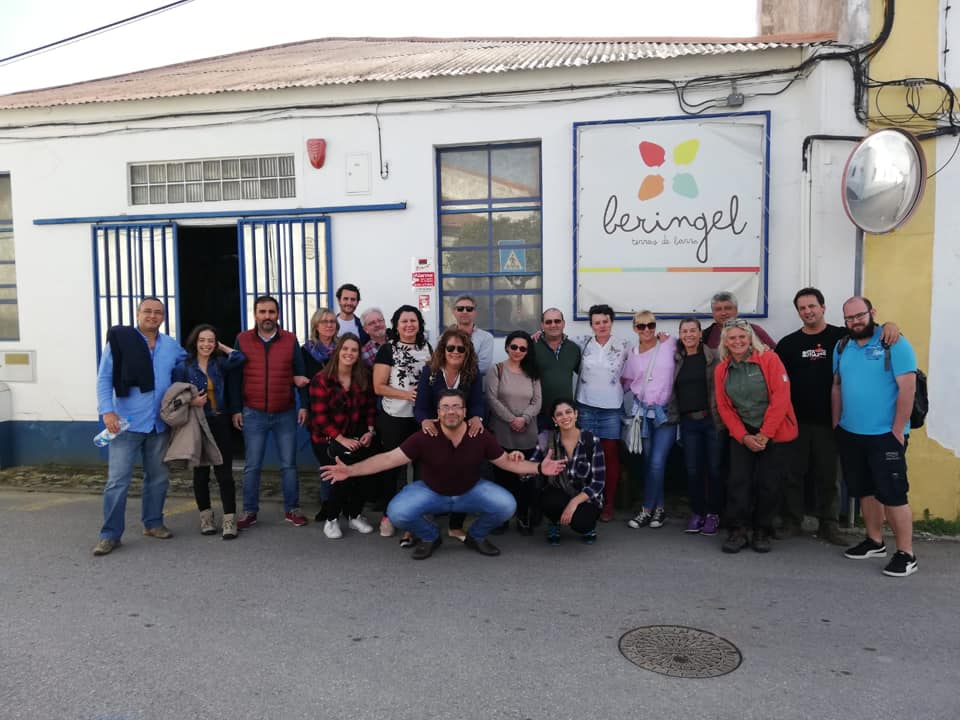 In the afternoon the visit was in Beringel, where we were received by the president of the parish council. Beringel is a Portuguese village in the municipality of Beja, in the Alentejo region, with 15.04 km 2 of area and 1 301 inhabitants. Its population density is of 86,5 hab / km 2. It is located in the extreme northwest of the county of Beja. Beringel is known for the production of clay pieces. This production is intended for household crockery, namely, pots, roasters, water barrels, cookers, pots, pots, coffee makers, among others, not artistic. It is dark red in color and excellent for use in the oven; has Roman and Arab forms. The participants had the opportunity to get to work and create pieces. We also visited the pedrestre route created next to the Pisão dam where local power promotes Birdwatchig activities and fishing as an attraction.

The next morning the group was received by the councilor for culture and youth, Arlindo Morais, at the Beja Municipal Chamber. In the noble hall but in an informal tone were shared concerns and the strategic vision of the municipality for the development of sustainable tourism in the region.

Next, we visited a local radio station “Rádio voz da plainície” which made the full coverage of the visit and where some of the participants could share live with the listeners of the radio the feedback of this experience in the city of Beja.

Then we visited the local delegation of the Portuguese Institute of Youth. Later the destination was the Cabeça Gorda, a parish of the county of Beja, located a few kilometers from the city, with 78,16 km 2 of the area and 1 386 inhabitants. We began by visiting “Erva doce”, a family farm in the famous muds of Salvada, aromatic and medicinal plants, valuing the region’s endogenous and spontaneous plants for medicinal and other purposes. We visited the banana plantations, packing, and drying areas, we were still presented with a tea of good lives. 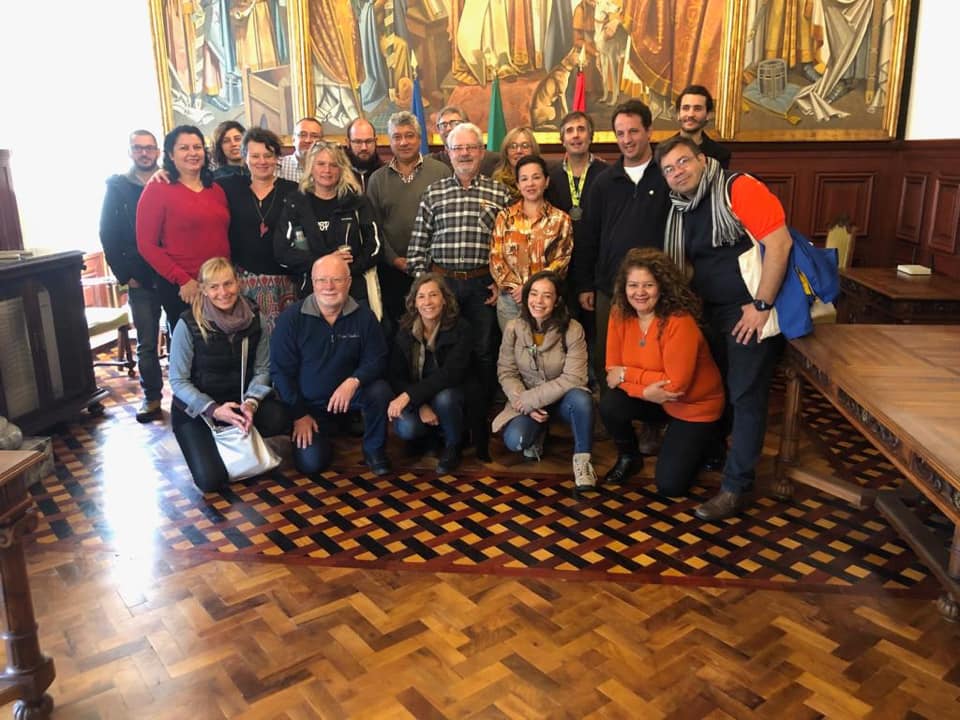 Then we visited the headquarters of the JODICUS theater group, where its president told us about the history from the foundation in 1978 to the present day. The dinner was held at a local restaurant at Cabeça-gorda where the chairman of the board told us about the “Silarca – Mushroom Festival” happening in the village the following weekend. It aims to promote the natural and wild resources of the Cabeça Gorda in a sustainable way, preserving ancestral practices of gastronomy and popular wisdom. Upon returning to the city of Beja the participants were invited to take a night stroll throughout. Due to fatigue, not everyone participated.

The next day we visited the Agroturismo “Xistos” which has in its origin the passion for Nature of an authentic and genuine Alentejo to develop a greater good for our territory. From this passion came the desire to open doors to the community and to make known this natural wealth, witnessed and valued by the family.

Perpetuating and making known this natural heritage has become the biggest challenge! Nature present in the Ribeira de Terges and Cobres and in the ravine Monte Fava that crosses the farm – Herdade Monte da Ponte. Xistos emerges as a physical space of intentions open to the community, which in addition to having as its main objective to make known the nature and its potential and agricultural practices present on the farm. It also aims to be a space that promotes distinctive and pedagogical tourism resulting from the offer of experiences from multiple partnerships, offering unique experiences and special moments, which captures the interest of different types of Tourists.

The project was shown to us and explained in the first person by its owner.

In the afternoon and with an optional character it was planned to participate in the carnival of Cuba that due to unfavorable weather conditions did not happen.

In terms of the balance sheet, the activity was quite satisfactory which was reflected in the contentment and evaluation of the participants. Perhaps the program was a bit tiring because the participants were already coming from the study visit held in Hungary, however, the proposed objectives were achieved and all took the bag full of good practices and inspiration.