I am Lora and I am volunteer in ,,Fekete Sereg” association here, in Nagyvászony. I think that volunteering is very exciting and meaningful activity. I always love to get to know different countries and cultures and I chose to volunteer in Hungary because I’m interested in linguistics and I was attracted to learn a little bit Hungarian language which is really special and unique. I have to admit that from the first sight it looked quite difficult to learn, but step by step I see, that it’s really possible and I really enjoy the process of learning. I also love that here in Nagyvászony people have warm and close connections between each other and when I meet someone that I don’t know, for example in the street, in the bus or in the shop, but I greet them in Hungarian, they answer me and it feels so nice that trying to speak Hungarian gives a tiny possibility to feel a little bit like a local!

I was so impressed by Parliament, Buda Castle, Fisherman’s Bastion( Halász bástya). I visited Szent István Basilica too, I saw treasury expositions in its museum and I could see the panoramic view of Budapest city from the top of Basilica! What a breath-taking view! I also have plans to visit Hungarian National Museum, Hungarian National Gallery, The Museum of Fine Arts, Hungarian House of Photography, Budapest History Museum, also to sail a boa ton Danube River.

I’m so happy that I already could see Balaton Lake – the biggest lake in Central Europe. It is so wide, big and majestic! And its colour is so unique – blue with a shade of turquoise colour. I really love being in Hungary and being here, in Nagyvázsony. I think Nagyvázsony is very cosy, calm and cute village.

Now I would like to introduce you a little bit with my country. I came here from Lithuania and before I came here, in Lithuania was snowy. When I came to Nagyvászony, there also was snowy, so as I see climate in Lithuania and Hungary in winter is quite similar, but I have to say that in Lithuania is still colder because it’s more to the north. And if we would compare Lithuanian and Hungarian languages, they both are very archaic, unique and one of the oldest languages in Europe and both are quite difficult to learn for foreigners. But the difference is that Lithuanian language belongs to Indo-European languages group and it is the language that kept most similarities with sanskrit language. Hungarian language is not Indo-European language, it belongs to Finno-Ugrian languages group.

Lithuania is located in Middle-North-East Europe near Baltic sea.

Our capital city is Vilnius. Since medieval times Vilnius was tolerant, diverse and vibrant city where people from different nationalities lived peacefully. Later, in 1579 there was established Vilnius university – first university in Eastern Europe. The Old Town of Vilnius is really worth to see and it is included in UNESCO heritage list. It is mostly based on Baroque style, but you can also see architectural buildings of Gothic, Renaissance and Classicism.

As you know, Lithuania is located near Baltic Sea, so sea is very important for us. Million years ago, in Baltic Sea formed amber which is known as Baltic gold. We use amber to make jewellery, souvenirs, statues, various works of art. In one of our most popular resort cities Palanga we even have Amber Museum. Another seaside city Klaipėda is a harbour. There are a lot of ships and every summer we celebrate Sea Festival. There are ships’ parade, fair where you can buy craftsmen’ artworks or degustation various food. Also, there are a lot concerts with famous singers, huge shows with lights and dances.Also, our pearl of seaside is Curonian Spit – region, which includes cities like Juodkrantė, Preila, Pervalka and Nida. There you can visit the hill of wishes and enjoy unique countryside – sandy dunes. 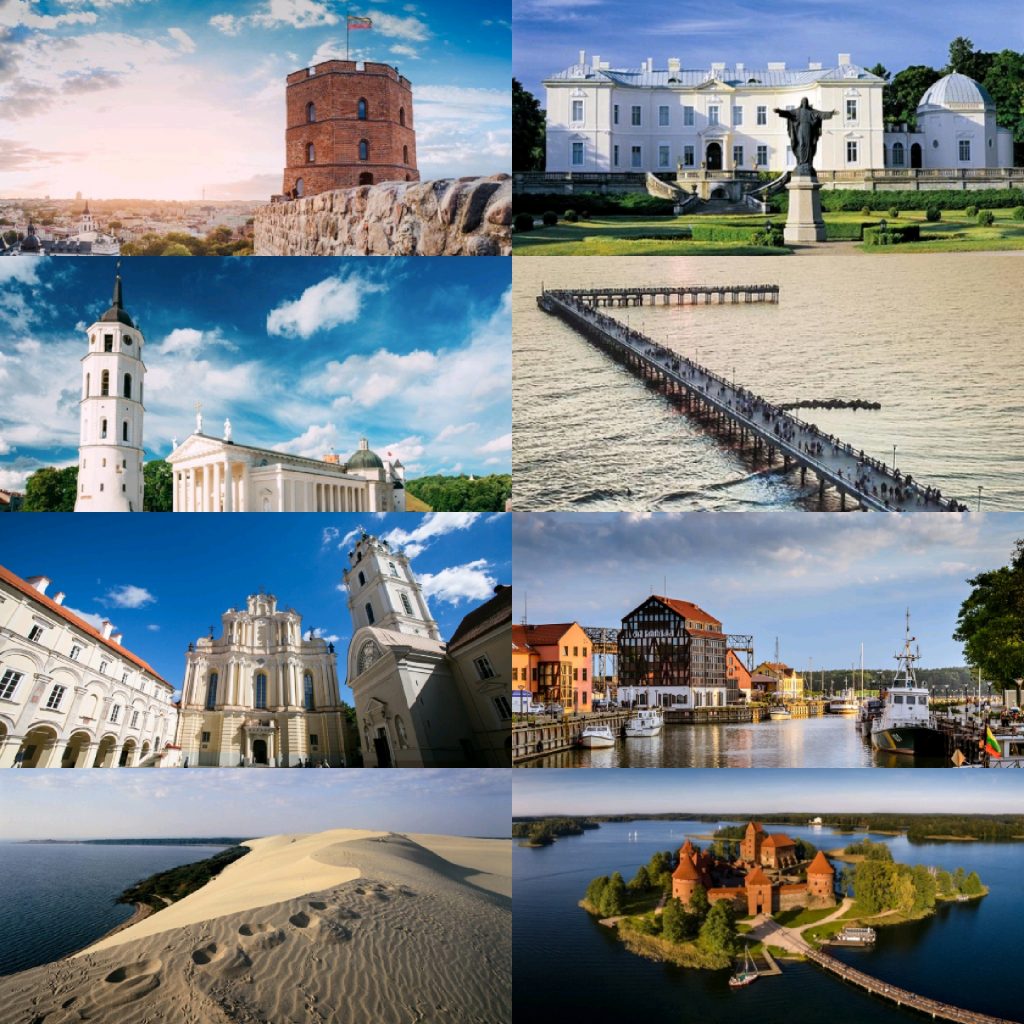 I could tell you about my country because there are a lot of things to see and to hear about these things is good, but even better would be to come here and see. So, I honestly invite you to visit Lithuania! For now, let’s just visit my country virtually. One of Lithuania’s travellers created very entertaining yet informative videos about Lithuania and Vilnius.  In youtube you can see two interesting videos from Jacob Laukaitis – “What is Lithuania?” and “What is Vilnius?”: https://youtu.be/KdPCxj1Yd2U  or this one:  https://youtu.be/WH9mTk1mxkI

I really invite you to watch these videos – I am sure you will like them!

And also, some historical facts for the ending: